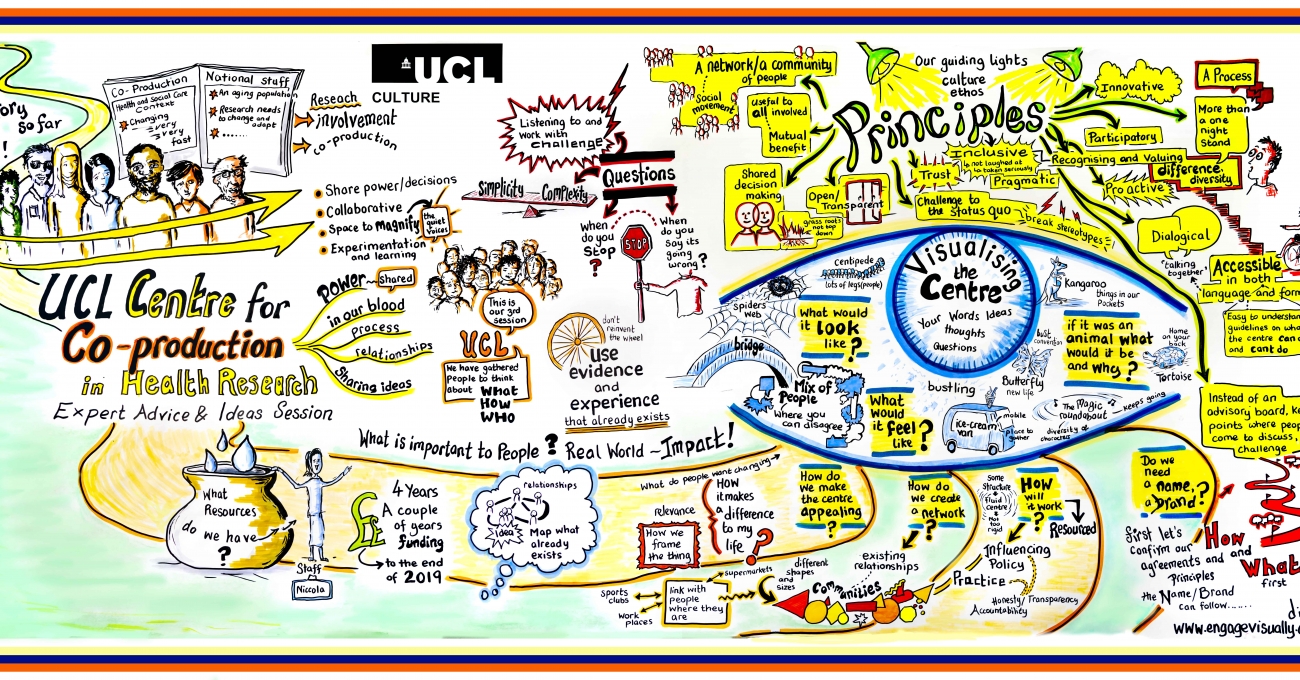 Co-Creation for better quality of life

University College London is developing a new Centre for Co-Production in Health Research with funding from Wellcome Trust. The underlying aim of The Centre is to focus on quality of life and people’s views of the best way to maximise this, rather than statistics and morbidity. The Centre champions co-production of health research, services and policy development, where there is genuine sharing of power and decision-making. Those involved want to showcase the benefits of co-production as a more inclusive methodological approach to research. They want to challenge the traditional funding model that often affects researchers’ ability to undertake truly co-designed projects by asking researchers (whether from the community or a university), to make decisions about research design, expected outcomes and results before initiating their work with patients, public and the community.

The co-ordinator, Niccola Hutchinson-Pascal has recently discussed her experience with one of the SISCODE project members. She informed us that “one of the key drivers for such a centre is the ever-growing push from society at large for universities to change the way they do things and how they engage with the communities around them. There is also a push within health from some funders, such as Wellcome Trust and the National Institute for Health Research, for more work in this area”.

The Centre initially funded four pilot projects which have recently come to an end. Their purpose was to use co-production as a research method in order for The Centre to learn about what works and what doesn’t when using this method. Alongside these pilots, they are also co-creating an evaluation strategy and framework, as well as training and supporting resources for The Centre.

Boxing and Youth Care
Action Youth Boxing Intervention have formulated a schools-based programme using boxing as a medium. Based on Cognitive Behaviour Therapy and Rational Behaviour Therapy, the organisation aims to help young people experiencing challenges with learning, behavioural and emotional issues. During the pilot, a framework for evaluating the impact of the work was co-produced with young people. Future work was developed as a partnership between Charlotte Woodhead at UCL and Albert McEyeson at Action Youth Intervention Project.

Innovation for Adults with Hearing Loss
A diverse steering group organised a two-day sandpit innovation workshop that brought together researchers, adults with hearing loss, designers and care staff to co-create novel research ideas to improve communication between adults with mild to moderate hearing loss with health and social care staff. A team, forged at the workshop, won £5000 to take forward an idea to test the acceptability and feasibility of using familiar sounds (such as birdsong) to increase awareness of hearing loss in a safe public space and increase engagement in hearing tests.

Lived Experiences of Uncommon Cancer Diagnoses
There are over 200 cancer types which may be termed ‘uncommon’. Patient representatives and specialist clinical nurses at the Royal Marsden worked alongside patients and carers to better understand their experiences following diagnosis. This enabled gaps in support to be uncovered and examined how they might be positively addressed.

Bleeding Gums and Diabetes
Intensive gum treatment has been shown to improve diabetes control and reduce the risk of cardiovascular disease by reducing inflammation in the body. To test whether the treatment works when applied to a community, Prof Ian Needleman at the Eastman Dental Institute worked alongside diabetes patients and community partners. The engagement was beneficial for members of the public involved, as they were able to learn about how health research works as well as what was happening at a higher level, outside the lab.

The Centre is currently working to collate all they have learnt from the pilot projects to feed back into its own development. There are plans for further future pilot projects later this year, to further advance The Centre and build a case for the benefits of working in this way. The Centre will launch officially, in whatever form it takes, in 2020!

To find out more about the Centre contact Niccola!